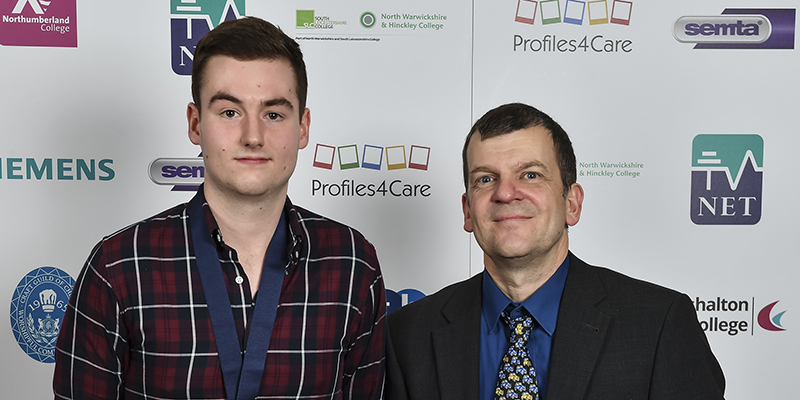 Twenty-old Marc Marshall from Courtland Properties has been crowned 2017 SkillELECTRIC champion after excelling in an intensive two-day practical competition at The Skills Show – the nation’s largest skills and careers event with over 80,000 visitors.

Marc Marshall gold presentationIn recognition of their excellent performance, Marc and four other SkillELECTRIC finalists have also been selected for the Team UK squad with the chance to represent their country in the forthcoming WorldSkills 2019 event in Kazan, Russia.

Marc, a student at Shrewsbury College, took top marks over his fellow finalists in a complex electrical installation task comprising various power, lighting and other circuits, components and control systems.

The task had to be completed within a strict timeframe and was marked against tough criteria including wiring and connection skills, inspection and testing and measuring and marking out, which had to be accurate within + / – 2mm.

Taking second place and a silver medal was Tom Seward of PI Lewis Ltd and Coleg Gwent. Third place and a bronze medal went to Connor Lewis of Blues Electrical and Cardiff & Vale College. Marc, Tom and Connor were all selected for the Team UK squad along with Piaras McErlean and Thomas Lewis.

Speaking after his win, Marc said: “I couldn’t believe it when I heard my name being called out as winner – I was completely shocked. I wasn’t expecting it at all as everyone’s work looked to be really good. I’m pleased about the Team UK squad opportunities and excited about what the future might hold.”

SkillELECTRIC is organised by NET and has the Joint Industry Board (JIB) as its lead sponsor.

“Marc’s work was of a very high standard, with everything completed on target to a high level of accuracy,” said Jon Dicken of NET. “His testing and fault finding skills in particularly were the two areas that gave him the slight edge in order to win top marks. Overall we were really pleased with the quality of work this year, so congratulations to all who took part.”

Steve Brawley, chief executive of the JIB, added: “I spent a few hours at the Skills Show on Friday and I was so impressed by the professionalism and dedication of every one of the competitors and their support team, led by Jon Dicken. The standard of work was uniformly excellent and I would like to congratulate all of the competitors and their employers and training providers.”

This website uses cookies to improve your experience while you navigate through the website. Out of these, the cookies that are categorized as necessary are stored on your browser as they are essential for the working of basic functionalities of the website. We also use third-party cookies that help us analyze and understand how you use this website. These cookies will be stored in your browser only with your consent. You also have the option to opt-out of these cookies. But opting out of some of these cookies may affect your browsing experience.
Necessary Always Enabled

Any cookies that may not be particularly necessary for the website to function and is used specifically to collect user personal data via analytics, ads, other embedded contents are termed as non-necessary cookies. It is mandatory to procure user consent prior to running these cookies on your website.