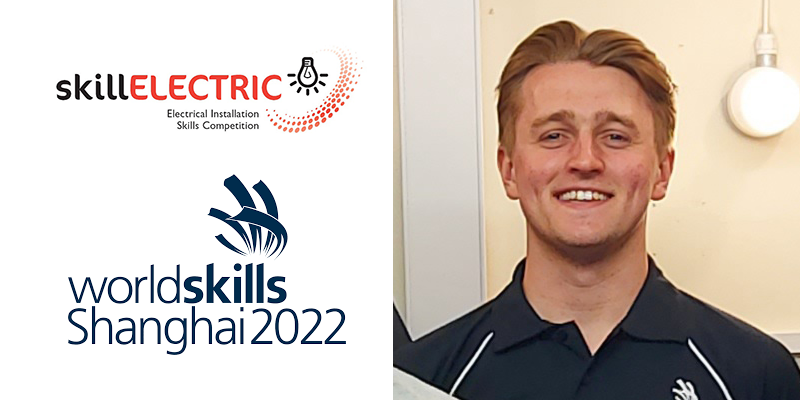 Alex going for gold in Shanghai

National Electrotechnical Training (NET), organiser of the SkillELECTRIC competition, has congratulated electrician Alex Rendall following his selection to represent the UK at the WorldSkills 2022 event in Shanghai.

Alex, who competed in SkillELECTRIC 2019 and completed his apprenticeship at Bridgwater & Taunton College, joins 38 other young people from various industries as part of ‘Team UK’ which will travel to China in October and compete against 80 other countries in a battle to bring home a gold medal.

Alex and fellow SkillELECTRIC finalists Tom Williamson and Ben Kidner were initially selected by WorldSkills UK for its ‘Squad UK’ back in 2020, after the three young men showed great potential for international progression. After an intensive training regime which was also impacted by the coronavirus pandemic, Alex was selected this month to represent the UK following a consistently high performance during training.

“We’re delighted not only with Alex’s success but also the quality shown by all three men as part of their Squad training,” said Carolyn Mason, NET Chief Executive. “SkillELECTRIC is the only industry competition with the pathway to compete internationally, which is a significant opportunity for those with the right talent, ambition and dedication.”

Geoff Shaw of Cardiff and Vale College is the WorldSkills UK Training Manager for electrical installation and has worked with Alex, Tom and Ben to develop their technical skills, alongside assistant training manager Gareth Jones.

“The quality of work from Alex, Ben and Tom has been outstanding, it was very difficult to pick them apart,” said Geoff. “Their commitment was second to none, whenever I set a task they were all extremely responsive, always on time and worked to an excellent standard. They should all be commended and with this positive attitude to work have a bright future ahead of them.”

Alex, who is employed by Somerset-firm James Norris Electrical, said of his Team UK selection: “It hasn’t really sunk in yet! The training has been hard, especially when you have two other amazing people beside you and the standard is really high. My training so far has helped me already at work and I’m lucky that I’m naturally motivated to better myself and always looking for ways to overcome problems.

“I’m now looking forward to the next phase of training between now and October to make sure I’m 100% ready.”

NET will be following Alex’s WorldSkills journey in the run up to Shanghai and will report on his progress.