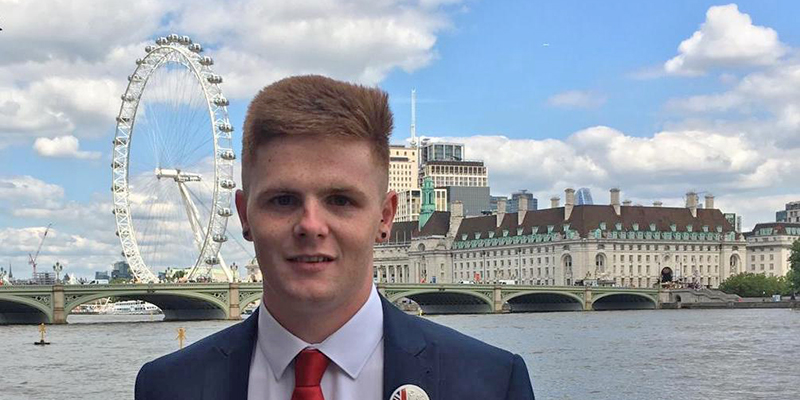 It’s not long now until WorldSkills 2019, where 37 members of Team UK will travel to Kazan, Russia to take part in the ‘world championship of skills’.

Thomas, employed by Blues Electrical in Cardiff, was not only a finalist in the 2017 SkillELECTRIC UK final, but he was also chosen to compete at EuroSkills 2018 in Budapest.

Earlier in the year he once again excelled during the Team UK selection process and was chosen to represent his country in the Electrical Installation competition.

Since then he’s been completing a rigorous training programme to prepare for competition against his peers from across the globe.

Thomas flies out to Kazan on 18 August in preparation for the WorldSkills event which takes place between 22-27th August. We caught up with Tom to get his views as he gets ready for the experience of his life!

“Since my selection for Team UK I’ve already been out to Kazan as part of the preparations, to take part in a pressure test and help us get ready for the finals later this month. I won third place out there which was great; I really enjoyed it and learnt a lot. Aside from that, I’ve had a few weeks of training and have been progressing really well. I’ve just trained for two weeks straight and have worked really hard, so I’m confident with my final preparations to go.

“The competition in Kazan is different to what I experienced in Budapest. For instance, in EuroSkills there was a written exam but now in WorldSkills there’s a fault finding module instead. There are different devices and a bigger build in general for WorldSkills.

“The response from my work, family and friends have been great and I couldn’t ask for anything more. My employer Blues Electrical have given me so much time off to prepare and better myself, which I’m really thankful for. My family and friends always ask how my training’s going and support me throughout it.

“I’m feeling really excited and ready to go to, but nervous at the same time! It’ll be a great experience for me. I’m always nervous going into competitions as I always want to do well. I’ve trained really hard and put the time and effort in, so I’m hoping to do well in the competition.”

Good luck Thomas – the whole of the UK electrical industry is behind you!

This website uses cookies to improve your experience while you navigate through the website. Out of these, the cookies that are categorized as necessary are stored on your browser as they are essential for the working of basic functionalities of the website. We also use third-party cookies that help us analyze and understand how you use this website. These cookies will be stored in your browser only with your consent. You also have the option to opt-out of these cookies. But opting out of some of these cookies may affect your browsing experience.
Necessary Always Enabled

Any cookies that may not be particularly necessary for the website to function and is used specifically to collect user personal data via analytics, ads, other embedded contents are termed as non-necessary cookies. It is mandatory to procure user consent prior to running these cookies on your website.