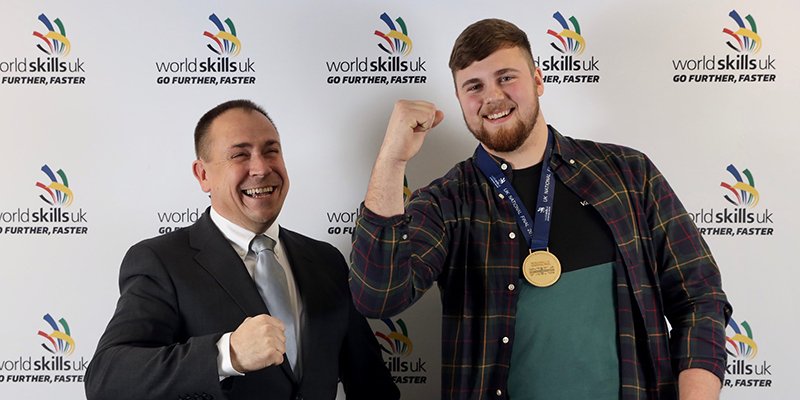 Employed by Rogers Restorations Electrical in Somerset, Ben kept calm under the watchful eye of students, parents, college representatives at the event where more than 500 apprentices and students competed in over 70 different disciplines – battling to be the best in the UK.

Ben scored consistently high in a complicated task to install a range of first and second fix items including PVC/PVC surface clipping, plastic conduit and trunking and, in a new challenge to this year’s final, steel conduit and a surface clipped MICC circuit. Judges had to assess how well the competitors performed in areas such as measuring accuracy (within 2mm), horizontal and vertical alignment, electrical terminations, functionality, containment symmetry, testing and inspection and safe working practices, including PPE application.

Taking second place and a silver medal was Lewis Sim of Moray College Technology Centre and employed by McDonald and Munro. Third place and a bronze medal was awarded to Darren Kerr of SECTT and Prime Electrical Group. A special ‘Highly Commended’ mention went to Alex Rendall of Bridgwater and Taunton College for an excellent performance alongside the three medal winners.

All finalists in the competition received a two-channel HD CCTV kit from ESP, a professional safe isolation kit from Di-Log, a goody bag from Unite the Union and were kitted out in workwear from Dickies. As the winner, Ben also received an 18th Edition Multifunction Tester from Di-Log and his college also received £500 worth of products from Scolmore Group.

Martyn Walley, Group Technical Director at Scolmore Group, judged competitors at the regional events and the UK final: “The level of competency throughout this year’s qualifying stages was tremendously high, which is a demonstration to the level of training completed from all areas of the UK and is a reassuring message for the industry,” Martyn said.

“For any competitor to reach the UK final is a fantastic personal achievement and most certainly something to be proud of. Ben secured his lead position ahead of his fellow competitors by remaining balanced and calm with his approach to the task. Ben’s dedication to a professional installation and attention to detail of the varied tasks was further demonstrated in Ben’s consistent high score throughout all areas, which ultimately gave him the well-deserved result of gold placement.”

Ben, along with a number of fellow competitors, is now eligible for selection for the Shanghai 2021 WorldSkills event. Within just a few weeks WorldSkills UK will announce which SkillELECTRIC competitors have been selected for Squad UK.

“It hasn’t really sunk in yet, I can’t quite believe that I’ve won! I had no idea how well I’d done, everyone’s work was at such a high standard it could have been anyone’s game,” said Ben. “The prospect of qualifying for Shanghai 2021 is something that I’m excited about. It’s always good to push yourself and the thought of competing internationally doing something I enjoy the most – electrical installation – is just brilliant.

“I’d like to thank Bridgwater and Taunton College for all their support, and a special mention to Roger Rogers and all the team at Rogers Restorations Electrical Ltd for being behind me the whole way.”